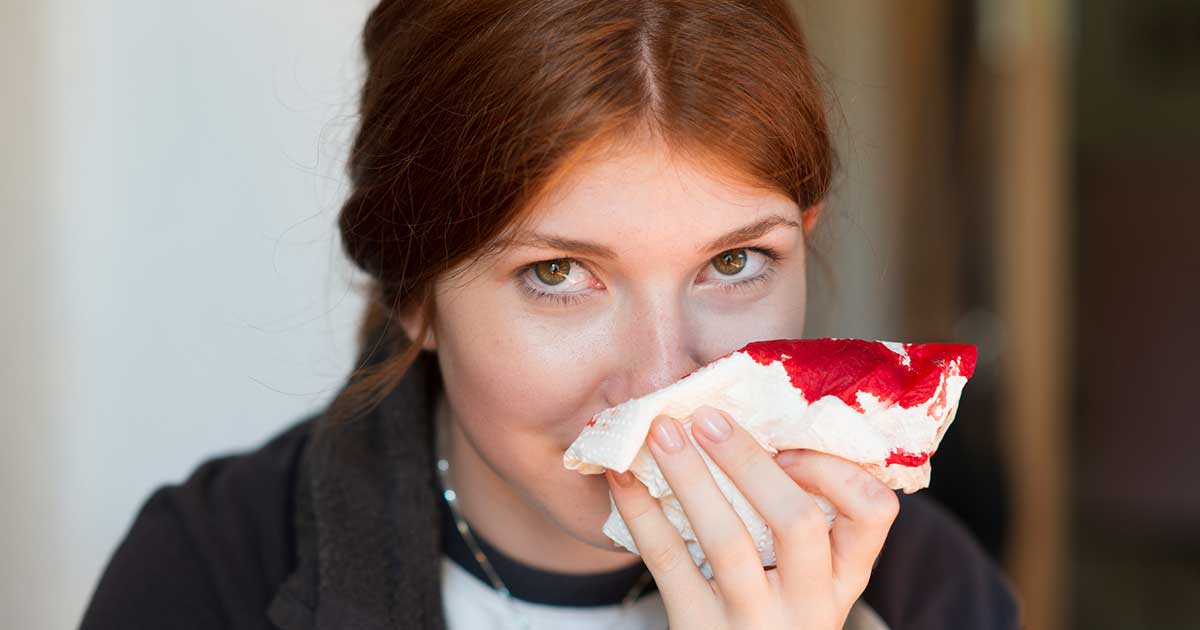 How Do You Stop a Nosebleed?

Nosebleeds can pose a rather scary situation, but usually, they aren’t anything to worry about. The nose is home to various blood vessels that are close to the surface. As such, they are very fragile and easy to break. Even blowing your nose too much can cause these blood vessels to burst.

So, what’s the deal? When are they serious? What exactly causes them? How do you stop a nosebleed and can you prevent them?

Why Do Nosebleeds Happen?

Frequently, nosebleeds are caused by dry air or (unfortunately) too much nose picking. When your nasal passageway becomes dry, the skin and blood vessels are more likely to peel or break. Further, if the nasal passageway is irritated by anything, like your finger, it may lead to bleeding.

In addition, other common causes include:

The average nosebleed does not require medical intervention. It can easily be resolved at home. However, if you have a nosebleed that lasts longer than 20 to 30 minutes, it may be best to seek medical attention. There may be more at play than just dry air. Further, if you have frequent nosebleeds, it may also be a good idea to get them checked out by your doctor.

Luckily, most nosebleeds can easily be prevented. How?

Typically, nosebleeds tend to impact children between the ages of two and 10 (nosebleeds in kids are fairly common), elderly individuals, pregnant women, individuals who take aspirin regularly and individuals with blood clotting disorders. However, anyone can get a nosebleed and they are relatively common.

So, how do you stop a nosebleed quickly, safely and effectively? Here’s how:

While protocol used to be to lean back, today, experts are recommending leaning forward. This stops blood from going down the back of your throat, which could cause vomiting or choking. Instead, the blood is able to flow freely out of your nasal or throat cavity.

STEP 2: Do NOT stuff a tissue up your nose

It might be tempting. But stuffing anything up your nose to stop the bleeding can actually lead to a much worse situation. It aggravates your blood vessels even more, potentially opening up new tears inside the nose. It’s best to hold a cloth or tissue under the nose and allow the blood to flow out.

Gently pinch the soft part of your nose, right below the bony part. Hold this pressure for about 10 minutes to sufficiently stop the bleeding. If it doesn’t stop after this point, re-apply until the bleeding stops. If the bleeding seems excessive or doesn’t stop within 30 minutes, seek out immediate medical attention.

After you have resolved your nosebleed, avoid touching or irritating your nose further. Do not blow your nose or perform any activity that could reopen old wounds.

What About More Severe Cases? When to Worry About a Nosebleed

A nosebleed is considered severe if it lasts longer than 30 minutes or you experience more than two a week. If this happens, book an appointment with your doctor. Your doctor may then recommend you to a throat or nasal specialist, depending on their findings.

Frequent nosebleeds may be indicative of a more serious health problem, such as high blood pressure, a blood clotting disorder or other health conditions. Usually, for these cases, specific medication will often be prescribed. This should cause your nosebleeds to subside.

You should also see a doctor if your nosebleed is associated with any of the following:

They happen to the best of us on occasion. By using the steps above, you can stop a nosebleed in its tracks and continue to get on with your day. If you get frequent nosebleeds, consider taking a few tips from the prevention section above. Further, be wary if there is excessive blood or it continues for a long duration. This, again, could suggest a more serious problem.

5 Habits to Get You Living a Healthier Lifestyle

The Importance of Taking Care of Your Mental Health